Lexington Managers scoop a double at the Acorn Awards 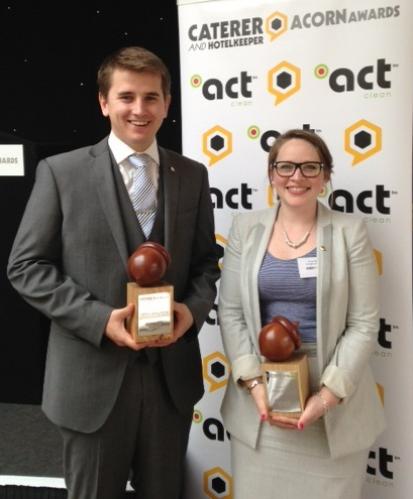 Two ofLexington Catering’s managers, Scott Wakefield and Emma Rogers, have been named as Acorn Award winners, recognising them as future ‘Hospitality Stars’ at the annual Caterer and Hotelkeeper’s Acorn Awards.

The event was held at the Rockliffe Hall Hotel on Monday 10th June.

Now in its 27th year, the Acorn Awards are designed to recognise the brightest future stars of Hospitality, acknowledging their flair, skill and achievements and to reward their hard work. The Acorns recognise 30 people under 30 who are nominated by their peers and colleagues for having made an impression in their field. This year over 120 people were nominated across the Hospitality sector.

The Acorns are seen as one of the most prestigious awards within the Hospitality industry and are much coveted by both individuals and the companies who employ them.

Emma and Scott both joined Lexington as part of Lexington’s Graduate Scheme in 2010 and 2006 respectively and have since then demonstrated tremendous dedication, talent and passion for their careers at Lexington and the wider hospitality industry. Emma and Scott were the only winners to come from Contract Catering in a field that was pretty much dominated by hotels.

Mike Sunley, Chief Executive at Lexington says “We are all so proud of Emma and Scott’s greatly deserved success at this year’s Acorn Awards. For Lexington to be the only representatives of Contract Catering at the awards demonstrates the excellence that Emma and Scott strive for and achieve daily and is testament to the dedication and enthusiasm that everyone has in the importance of our Graduate Training Scheme.”

Future success is almost guaranteed, proven by the fact that one of Lexington’s founding Director’s Katharine Lewis (nee Campbell) received the same accolade back in 1996!