Team Lex Get On The Bike For Charity Challenge

This year, Springboard Charity UK organised a 220-mile cycle ride, from London to Paris, to support their work to help young people achieve their potential and nurture unemployed people of any age into work. This year 20 teams took part in the challenge to raise money for the charity. Here, one of our cyclists, Amy-Jane, talks about the epic journey.

It might not have been the Tour de France, but it was physically and mentally challenging enough for us. There were punctures, accidents, cramp, GPS failures and tears during the three days we cycled the 320 miles, from London to Paris. But we also had a lot of fun and raised almost £2,000 for the charity! 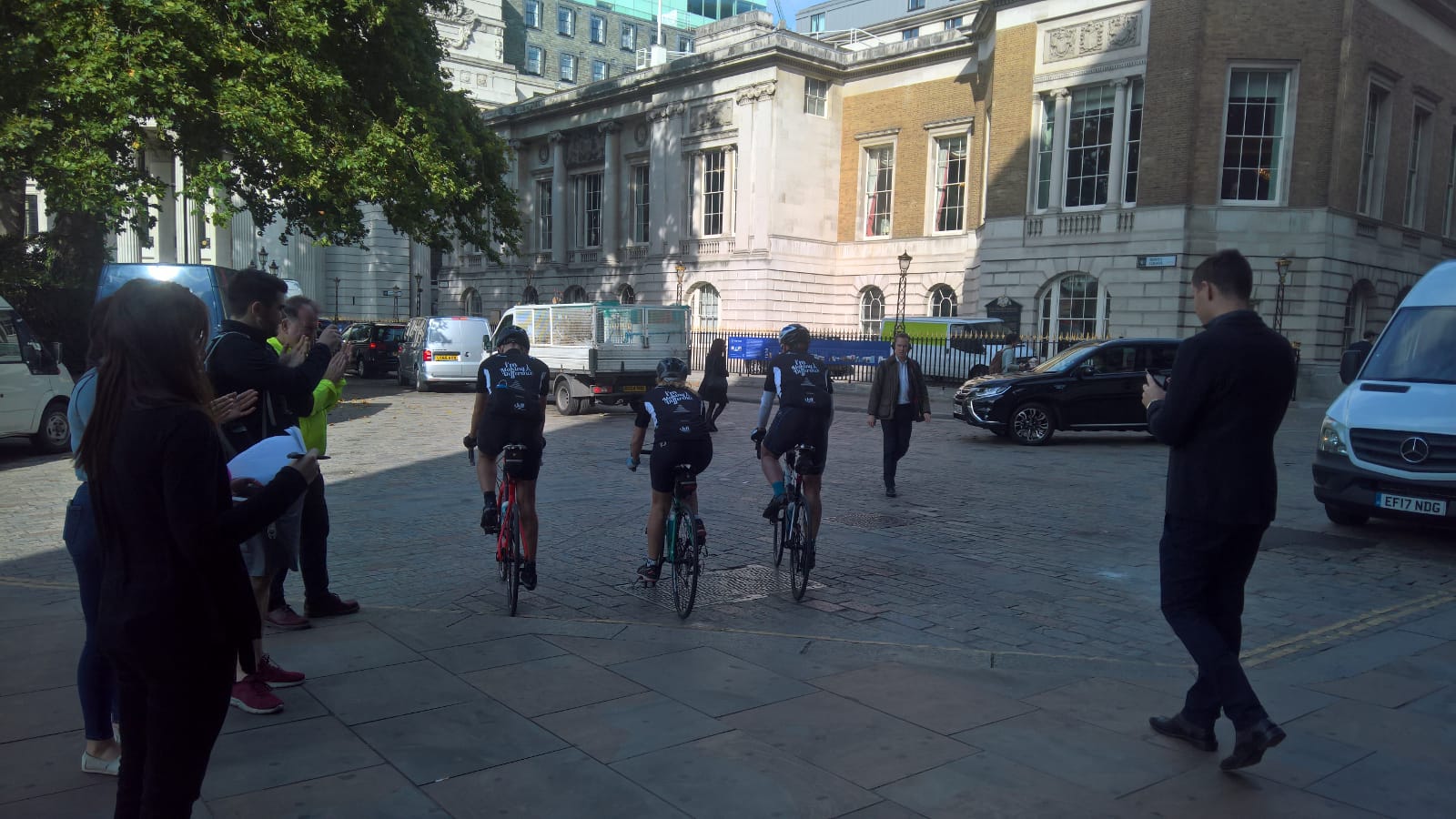 With our Lexy cheerleading squad at Tower Bridge we were ready to begin. Three of us – myself, Chris West and Harvey Loake – set off to cycle the first 80 miles to Portsmouth.

But disaster hit before the event left London. Not only did one of our team have to pull out, due to injury, but Harvey’s shoe got stuck in his pedal and he fell off his bike. This was all before we had left the City. We managed to fix the problem and solider on.

This was our toughest day. It was horrible conditions – very wet, cold and hilly – and everything that could go wrong did. London was so busy and the bad weather did not help us on our journey to Portsmouth.

We were so close – then Chris got a puncture, with just five miles to cycle to the ferry port. We kept each other motivated – the cramp, cold, aches and pains didn’t stop us.

Then when we finally reached the ferry port we were told our ferry was delayed. But we got there and when we were allowed to board we found our cabins and slept on the ferry to get some rest before day two.

We were up before 6am and set off after docking and it was such a different experience to day one.

It was so lovely and went a lot more smoothly. We were dry for starters – the sun was out and the roads were relatively quiet, which meant we arrived at the hotel on time. 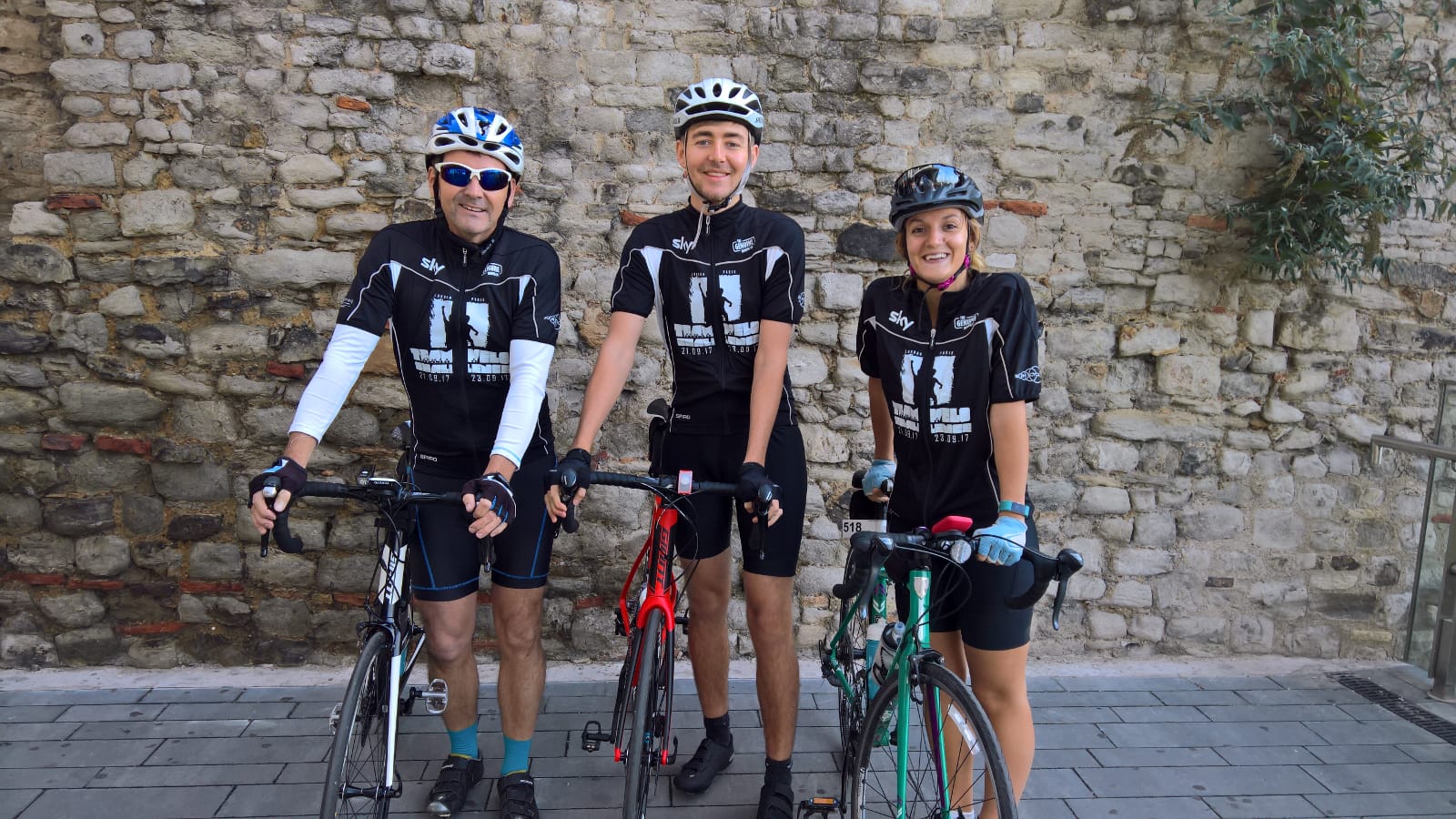 We had a fantastic BBQ with the other teams of cyclists who were staying in the same hotel, in Le Neubourg. We got to share stories and talk about the challenge before getting some sleep to prepare for day three!

After a good night’s sleep we managed to work through the pain, cramp, and fatigue. But we underestimated another cycling hazard: the curious ease of getting lost. GPS systems are all very well when they work but not so good when the GPS fails. Luckily we met another team on our journey so we joined forces and used their GPS to reach our destination. But this was not before I fell off my bike, whilst cheekily trying to overtake Chris!

Whilst Paris was busy, it wasn’t quite like London. It was dry and sunny, which made things so much easier. It was also so good to be in a team – we kept each other going. Particularly during the last eight miles – we could see the Eiffel Tower…we were so close but so far!

We finished with three other teams and were greeted with a champagne reception and canapés! The challenge did test us in every way: our fitness; our commitment; and, at times, our sanity. Yet, we crossed the line together!

There’s still time to donate so please dig deep for this wonderful charity.

Team Lexy Cycle From London-Paris To Raise Money For Springboard

Lexington apprentices put on their business hats as they take on trading challenge at Borough Market
Share this post
This website uses cookies to improve your experience. We'll assume you're ok with this, but you can opt-out if you wish.